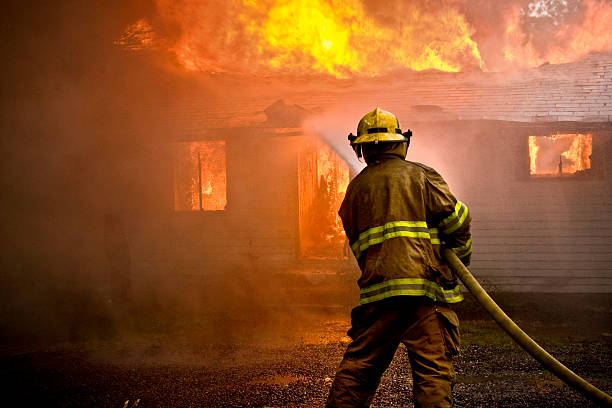 Wildfire has been a natural part of the earth’s ecosystem since the beginning of time.  But in recent history homes and communities have been built in what was once open wildland, making wildfire an unwelcome hazard and danger to life and property.

Up until the time we humans began living and recreating in the country, wildfires were started almost exclusively by natural causes, such as lightning.  They occurred predominately in areas with lots of hot, dry winds and withered vegetation.  In the U.S., forest and range fires were often a summer threat in the Plains and Western States.  The humid East and South would experience wildfires occasionally, when cyclical weather patterns would become more conducive to fire spread, but historically less compared to the West.  One thing is for sure; the more people in an area the more there are fire starts, both accidental and intentional.

The news has increasingly been reporting on major wildfires; ones that become raging infernos, devouring homes and entire communities, with significant loss of life.  Why?  Large wildland fires have happened before, but not with the volume and loss of life and property that they are doing today.  Scientists tell us of the effects of Global Warming on our weather; what we used to expect as typical weather is no more.  Chronic drought, higher temperatures and strong winds are affecting wildfire behavior acutely.

Fire season used to be a defined period of the year, with rare exceptions.  Now, we see fire season becoming year around.  Further, fire departments are funded and staffed based on historical need; the increased number of fires and extended seasons are stretching firefighters and departments to their limits.

What does this mean to you?  No matter where you live in our beautiful country, if you are in or near forested, brushy or grassland areas, you can be susceptible to wildfire.  A change in the weather and a fire-causing event may be all it takes to create the beginnings of another inferno.  There is much information published on creating defensible space and improvements to help make your home and property more fire safe, so won’t preach on that here.  But wildfires, hurricanes, tornados, floods, epic snow and ice storms all have one thing in common:  they can make you and your family a victim in a short amount of time!

First responders and the military have an acronym that also rings true in life; lack of Proper, Prior Planning leads to Predictably Poor Performance! (6P’s)  They train regularly and maintain their equipment is top shape and ready to go, in order to be their best when called to action.  If we take a little time to plan about what we, our family and pets would need to not only survive but thrive during an emergency, we would also be much better prepared if/when the time comes and be less of a “victim”.  You may have to evacuate, or you may have to shelter-in-place.  Think and plan for both.

Are your important papers in one place and easy to take?  Do you have an extra amount of non-perishable food and water?  Toiletries, medicines and a change of clothes quick to collect?  And don’t forget flashlights, extra batteries, cell phone chargers, keys and such. The larger the emergency, you can assume the longer it will be before help arrives.  Preparation can make the difference between just surviving an emergency hour-by-hour, and being better able to care for yourself and your family during the emergency and beyond.